The New Investment List contains significant changes to foreign direct investment in Indonesia which were foreshadowed by the enactment in November 2020 of Indonesia’s watershed Law No. 11 of 2020 regarding Job Creation (the Omnibus Law), including the liberalisation of certain important business segments within the Energy, Resources & Infrastructure (ERI) sectors. See the table below.

An example of this is in the mining sector, whereby although mining is not included in the New Investment List (and would therefore theoretically be 100 percent open to foreign investment), the Indonesia mining related laws regulations (in particular, Law No. 4 of 2009 (as amended) and Government Regulation No. 23 of 2020) will continue to require foreign owned mining companies to gradually divest equity to local shareholders so that, by the tenth year of commencing commercial production operations, at least 51 percent of the shares in the mining company are held by Indonesian shareholders.

It may take some time to work out how, in practice, such sector-specific regulations and policies of specific regulators will interface with the new general foreign direct investment rules.

Set out below are some of the more important changes introduced to foreign direct investment principles applicable in the ERI sector, together with some thoughts about these.

This liberalisation of the airport sector was foreshadowed by the Omnibus Law’s removal of the majority local ownership requirement for airport service and airport related services businesses under Law No. 1 of 2009 on Aviation.

The Indonesian government has focused on the expansion and redevelopment of Indonesia’s regional airports as a key driver of President Jokowi’s “Ten New Balis” initiative. While these plans have understandably been delayed as a result of the Covid-19 pandemic, the New Investment List reaffirms the government’s welcome commitment to developing (and diversifying) Indonesia’s tourism industry.

There has traditionally been strong foreign investment interest in Indonesia’s airport and seaport sectors. The liberalisation of foreign ownership in these sectors will be considered very positively by long-term investors who are keen to invest in Indonesia’s fast growing infrastructure sectors. Even though the mandatory requirement for local shareholders in these projects appears to have been removed, in practice, other benefits of involving experienced local partners will likely mean that joint venture consortia remain common.

Under the 2016 Negative List, the power generation sector was subject to foreign ownership restrictions based on the capacity of the relevant power plant, particularly for power projects smaller than 10 MW. However, the New Investment List removes these restrictions and allows 100 percent foreign investment for power plants with a capacity greater than 1 MW. In a further liberalisation of foreign investment in the power sector, the New Investment List also removes the maximum 95 percent foreign ownership restriction in the 2016 Negative List for electricity transmission and electricity distribution.

These reforms are likely to be most relevant in Indonesia’s fledgling renewable energy sector where projects can often be sized between 1 MW and 10 MW. Mini-hydro projects as well as small-scale wind, solar and biomass projects will likely benefit from the technology and innovations available to foreign-controlled projects in Indonesia.

The New Investment List also reconfirms geothermal activities as one of the business sectors prioritised for investment and potentially eligible for tax facilities and benefits. It appears that these facilities are given by the Government to increase investment in the geothermal sector as a renewable resource to help achieve the target of 23 percent utilisation of renewables (energy mix) by 2024.

The New Investment List removes the foreign ownership restriction under the 2016 Negative List for construction services using high-level technology and/or considered high risk. Under the 2016 Negative List, construction consultancy services with a value of more than IDR 10 billion and construction implementation services with a project value of more than IDR 50 billion and which used high-level technology and/or were considered high risk were limited to a maximum foreign ownership of 67 percent (or 70 percent for investors from ASEAN countries).

As the New Investment List does not classify high-level technology and/or high-risk construction services into the category of business lines which are subject to foreign ownership restrictions, it appears that construction consultancy services and construction implementation services which use high level technology and/or are considered high risk are not subject to any foreign ownership restrictions under the New Investment List.

Further, the New Investment List prescribes that the construction of buildings and industrial buildings must be undertaken in partnership with local cooperatives, micro, small and medium enterprises (CMSMEs). The New Investment List does not provide any guidance to foreign investors on how the requirement for such partnership with CMSMEs may be satisfied. However (and pending the issuance of any further implementing regulations), we expect the Indonesian government will continue to apply its current interpretation whereby the required partnership arrangement may be satisfied in the form of a contractual profit sharing, operational cooperation (kerja sama operasional), outsourcing, distribution or subcontracting arrangement.

The New Investment List does not change the direct foreign investment framework for mining projects or mining services.*  Instead, it categorises certain mining activities (for example nickel ore mining) as business sectors prioritised for investment and potentially eligible for tax facilities and benefits, subject to the satisfaction of certain requirements such as the location of the mine, the types of activities undertaken or the construction or expansion of smelters. 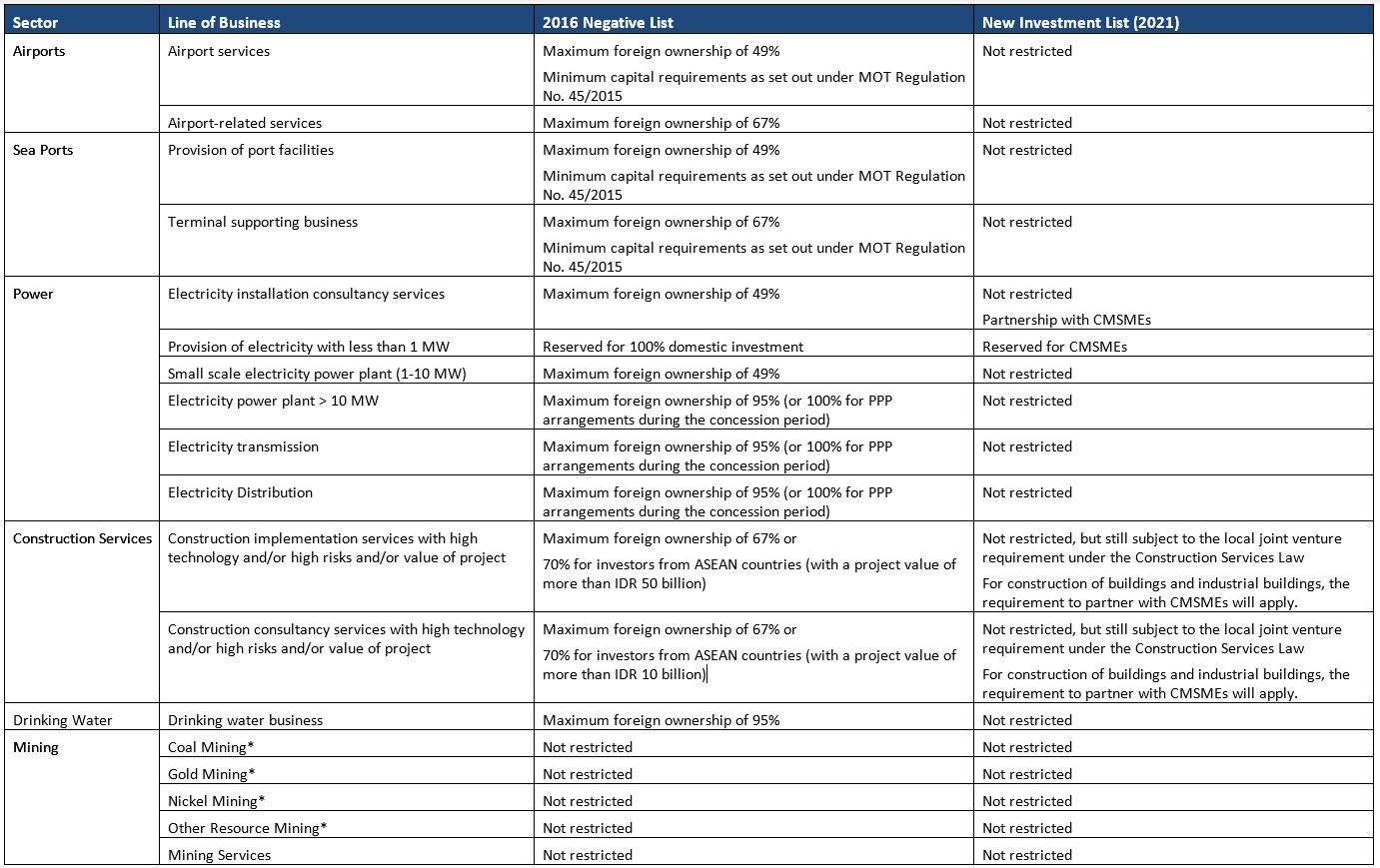 The foreign direct investment changes introduced by the New Investment List in the airport and seaport sectors are very significant and show the Indonesian government’s awareness of how these sectors have been impacted by the limits placed on new capital investment (and technology/innovation) from foreign investors.

Continued investment in Indonesia’s airports and seaports is crucial to the future development of Indonesia’s economy. The Indonesian government should be applauded for its boldness in these areas and we hope that there will be consistency in approach across all relevant regulators.

* Although mining activities are not included in the New Investment List (and would theoretically be 100 percent open to foreign investment), Indonesia’s mining laws and regulations (in particular, Law No. 4 of 2009 (as amended) and Government Regulation No. 23 of 2020) continue to require foreign-owned mining companies to gradually divest to local shareholders so that, by the tenth year of commencing commercial production operations, at least 51 percent of the shares in the mining company are held by Indonesian shareholders.

Dhani is a corporate partner in our energy practice. He specialises in mining, oil & gas and power sector transactions.

David is a partner of Herbert Smith Freehills who has been based in Jakarta for 30 years. He advises on M&A, energy, projects, finance and capital market transactions.