On 14 September 2018, Indonesia’s Minister of Public Works and Public Housing issued Regulation No. 23/PRT/M/2018 on Associations of Owners and Occupiers of Strata Title Units (“Regulation 23/2018”). Regulation 23/2018 came into effect on 18 October 2018 and replaces the previous regulations on owner/occupier associations1.

An Association of Owners and Occupiers of Strata Title Units (Perhimpunan Pemilik dan Penghuni Satuan Rumah Susun or “PPPSRS”) is a legal entity established by its members, being owners or occupants of a particular strata title property, which is mandated under the law to manage common rights2 in relation the strata title property. Investors who are looking to invest in any strata title property development in Indonesia need to consider the provisions of Regulation 23/2018 in order to understand the role of PPPSRS and the rights and obligations of its members which may affect the investor’s ability to manage and control the property.

One notable amendment introduced by Regulation 23/2018 is the application of the one owner, one vote concept in respect of (i) matters to be decided at the Establishment Meeting (as defined in section 1 below) and (ii) the appointment of members of executive committee (pengurus) and the supervisory committee (pengawas). This new application of “one owner one vote” limits the ability of a developer of or investor in a strata title property to exert management control over the PPPSRS, and key matters such as the naming rights over the property, even if they retain ownership of the majority of the strata title units.

The key provisions of Regulation 23/2018 are summarised below.

The deed of establishment, articles of association and by-laws of the PPPSRS must follow the forms prescribed in the attachments to Regulation 23/2018, and must be registered with the competent local government office.

Members of PPPSRS may vote on matters relating to (i) occupancy interests3, (ii) ownership4 and (iii) management5.

The PPPSRS membership includes (i) owners or (ii) occupiers with a power of attorney from the owners to vote on any of these three matters above. The accompanying table summarises the quorum and voting requirements for the matters to be decided by the PPPSRS meeting6.

** No mechanism for a second meeting.

Members of executive committee and supervisory committee are appointed for a term of office of three (3) years.

Developer must hand over management of the Common Parts, Common Objects and Common Land to the PPPSRS within three months after the PPPSRS is established. The handover must be performed before a public notary. A financial audit must be conducted by a public accountant agreed by the PPPSRS executive committee before the handover from the developer.

In managing the strata title property, the PPPSRS should establish or appoint a property manager within three months after its own establishment. The property manager must be a legal entity and have an appropriate business licence from the relevant local government office.

3. Matters relating to community relations among occupants, namely determination of residential rules, implementation of other community activities, and determination of amount of contributions for security, sanitation and social community.

5. Matters relating to operational activity, maintenance and care of Common Parts, Common Objects and Common Land, payment and determination of contribution for management and sinking fund.

6. Based on a strict interpretation of the provisions of Regulation 28/2013. We are currently closely monitoring how these provisions are being implemented in practice, as in our experience implementation may be influenced by developments in practice. 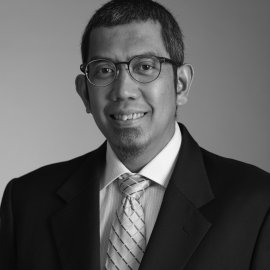 Iril is a founding partner of the firm. He specialises in cross-border M&A transactions and the real estate sector.

Teguh is a corporate partner who specialises in public and private M&A, joint ventures and foreign investment, particularly in the financial services, real estate and TMT/digital economy sectors.

Vik is a partner at Herbert Smith Freehills on permanent secondment to the firm. He specialises in cross-border M&A and the financial services, Fintech, real estate and TMT sectors.