Home > Latest Thinking > Omnibus Law Insights: Are the Labour Reforms...
Back to top

On 5 October 2020, Indonesia’s Parliament passed the Omnibus Law (2020 Job Creation Law), introducing significant amendments in a range of areas, including Indonesia’s laws on investment, employment, immigration, environmental standards, business licensing and building permits. The law is now awaiting the signature of the President. If the President fails to sign the law within 30 days, it will be deemed effective at that time in any event.

In a previous Omnibus Law Insights article, we looked at the potential impact of the 2020 Job Creation Law on investment into Indonesia. This article focuses on labour reform aspects of the new law.

The labour reforms in the 2020 Job Creation Law have largely been controversial because they are widely reported to introduce a fundamental shift in employee protection in Indonesia. While this is true for certain aspects of the law, such as employee entitlements upon termination, employers should be mindful that many of the changes may actually be employee-friendly. We take a look at the changes below.

Prior to the new amendments, Indonesia’s primary employment legislation – Law No. 13 of 2003 on Manpower (Law 13) – stated that employers must apply for a written permit from the Minister for Manpower (Izin Mempekerjakan Tenaga Kerja Asing or IMTA) to employ a foreign national. The 2020 Job Creation Law removes this requirement.

Many commentators consider this amendment to be disadvantageous for local employees since it makes it easier for foreign nationals to be employed by Indonesian businesses. However, the requirement to apply for an IMTA was, in fact, abolished under Presidential Regulation No. 20 of 2018 on Expatriate Utilisation and Ministry of Manpower Regulation No. 10 of 2018 on Procedures for Utilisation of Foreign Workers (MOMR 10/2018) (see our update here). Thus, this amendment is only an administrative change that consolidates into Law 13 a policy already implemented via Presidential and Ministerial Regulations, so is unlikely to have much practical implication.

Additionally, Law 13 required employers to obtain approval from the Ministry of Manpower for their Manpower Utilisation Plan (Rencana Penggunaan Tenaga Kerja Asing or RPTKA). This general requirement remains, but under the 2020 Job Creation Law, a broader range of companies are now exempt from this requirement.

Prior to these amendments, employers did not have to seek RPTKA approval if the foreign nationals were:

The exemption from RPTKA approval for start-up companies “based on technology” is intended to assist entrepreneurs and start-ups in Indonesia’s tech sector, which is in line with President Jokowi’s stated intention to develop this sector.

The 2020 Job Creation Law removes all of these restrictions on the duration, extension and renewal of fixed-term employment contracts.

However, the restrictions on the type of work for which fixed-term employment contracts may be used have generally been retained, but with some adjustments.

Since further rules on the types of work, duration and extensions will be set out in the implementing regulations, the extent to which these changes will increase flexibility for employers in managing fixed-term contract employees remains to be seen.

Employers should also note that compensation will now be payable upon expiry of a fixed-term employment contract, which was not previously required by law. The details of this compensation are to be set out in implementing regulations.

Meanwhile, the compensation payable upon early termination of a fixed-term employment is unchanged.

The 2020 Job Creation Law increases the maximum permitted overtime hours from three to four hours on any one day and from 14 to 18 hours in any one week.

The requirement to obtain the employee’s consent to work overtime is unchanged.

PRIORITY IN BANKRUPTCY OR LIQUIDATION

Previously, employees were entitled to receive unpaid wages in priority to the employer’s other creditors in case of the employer’s bankruptcy or liquidation.

The 2020 Job Creation Law now makes clear that employees are entitled to:

It is presently unclear what ‘other employment rights’ refers to, but our initial view is that this would likely cover rights to termination payments.

There is no national minimum wage in Indonesia. Instead, each provincial government is responsible for setting minimum wage levels.

Previously, employers of all sizes were prohibited from paying wages below the applicable minimum wages in that region.

Under the 2020 Job Creation Law, micro and small enterprises are now exempted from having to pay the minimum wage.

Previously, employees with six consecutive years’ service were entitled to at least two months’ long service leave if so provided in the company’s long service entitlement policy, which must be in place since 8 April 2004 for this entitlement to arise.

The long service leave entitlement has been removed under the 2020 Job Creation Law, but the parties can mutually agree on such entitlement.

Since the 2020 Job Creation Law was passed, termination of employment issues have been considered to be the most controversial. While it is true that some provisions on termination of employment under Law 13 have now been removed and/or amended, it remains to be seen the extent to which the changes introduced by the 2020 Job Creation Law will have substantive practical implication.

These requirements created difficulties for employers because until a court order was obtained (which could involve a lengthy and resource-intensive process), the employment relationship and the obligation to pay wages remained in place.

The 2020 Job Creation Law does not significantly alter the employment termination process but some of the relevant requirements and rights have been varied.

In order to terminate employment, the employer must now notify the employee the reasons for their termination, unless:

If the employee rejects termination after receiving the notification, employer and employee must enter bipartite negotiations.

As there is no express requirement for the notification to be in writing, in practice, we expect that this notification will usually be given (verbally or in writing) at the time of or immediately prior to the negotiation. This does not differ greatly from current practice.

If the negotiation fails, then termination must be conducted in accordance with the industrial dispute settlement procedures. This means that mutual consent or IRC approval may still be required.

While the termination process itself has not substantially changed, the 2020 Job Creation Law does introduce important changes to the grounds for termination.

Previously, employers could terminate an employee in the event of, among other things:

where the employer or employee did not wish to continue the employment relationship following the corporate restructuring.

The 2020 Job Creation Law removes the grounds for employment termination under points (a) and (d) above, but replaces them with two new grounds:

These terms are not defined in the section of the 2020 Job Creation Law that amends Law 13, creating uncertainty. As previously, the policy applied by the manpower authorities on this point will be key.

Under the 2020 Job Creation Law, Standard Severance will now be applicable regardless whether the employer or the employee refuses to continue the employment relationship on the above grounds.2

Employers intending to implement a workforce restructuring or redundancy programme following a corporate restructuring should pay careful attention to the amendments and nuances introduced by the 2020 Job Creation Law.

Perhaps the most significant (and controversial) labour reform introduced by the 2020 Job Creation Law is the reduction in termination payments.

The accompanying table contains a general comparison between each component of termination payments before and after the 2020 Job Creation Law. 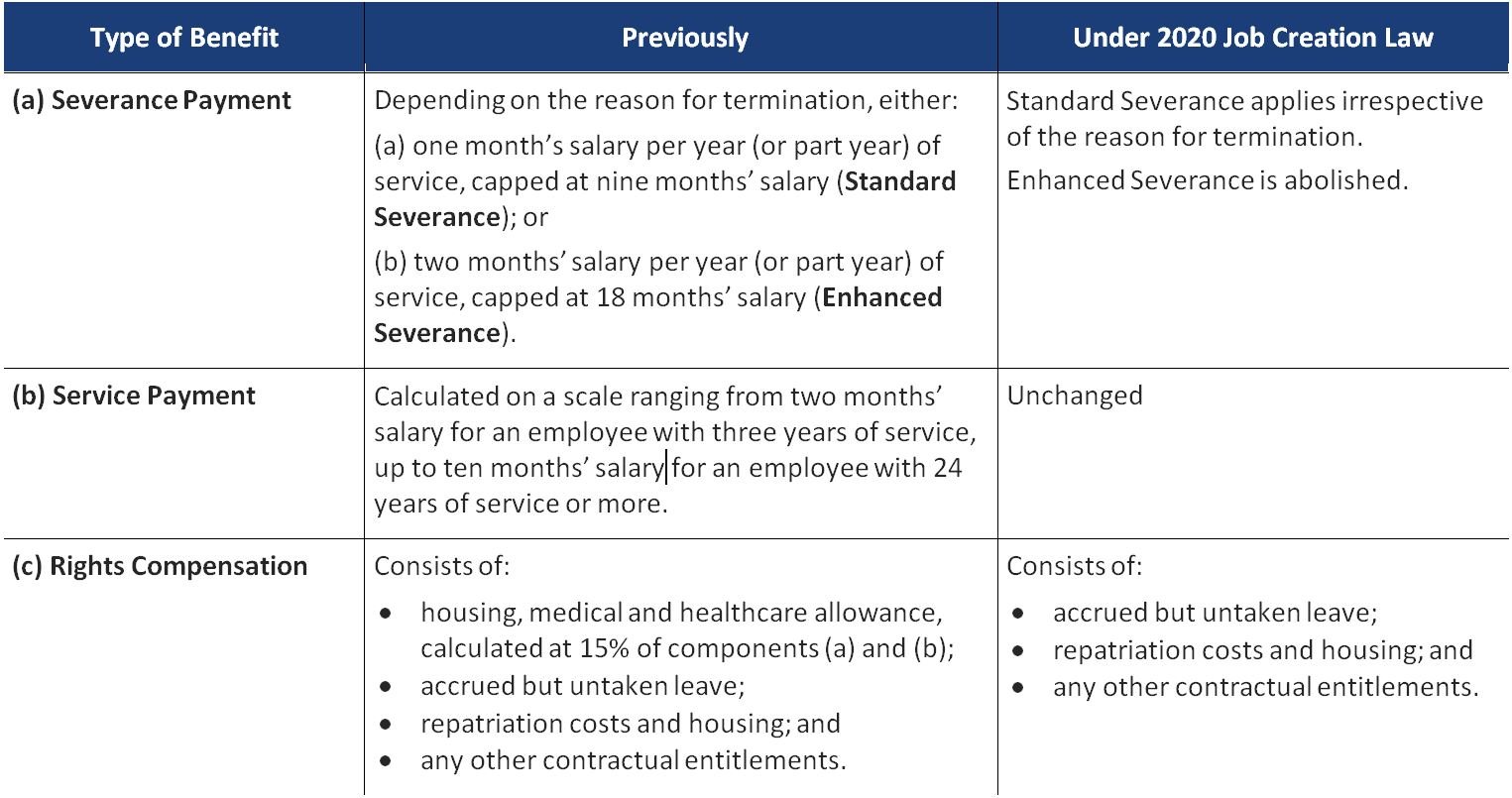 In summary, the 2020 Job Creation Law removes the requirement to pay Enhanced Severance. This is a fundamental change, since previously there were only certain situations in which the employer had to pay Standard Severance. There is also no longer a requirement for employers to pay housing, medical and healthcare allowances (which were calculated as an additional 15% of total severance payment and service payment) upon termination.

These amendments significantly reduce the employer’s financial burden on termination of an employee.

Previously, employees were only entitled to rights compensation pay (component (c) in the table) if they resigned.

Under the 2020 Job Creation Law, it appears that in principle employees may now be entitled to receive all the termination payment components (i.e. revised components (a) to (c) in the table) upon resignation. However, as with the other changes above, termination payments will be subject to further implementing regulations. So it remains to be seen whether any exceptions will apply to this enhanced entitlement upon resignation.

The 2020 Job Creation Law introduces a new category of social security under Indonesia’s BPJS System – unemployment insurance benefits. The premium contributions for these benefits are to be paid by central government.

The eligibility criteria and details of unemployment insurance benefits are to be set out in the implementing regulations. These benefits will include cash payments, access to job openings and training, and compensation from the government (capped at six months’ wages).

The labour-related aspects of the 2020 Job Creation Law have largely drawn negative media coverage, as seen in protests across the country led by labour unions and other groups.

While some changes are significant and likely to encourage investment into Indonesia, on careful examination, other changes may in fact be seen as pro-labour, or simply maintaining the status quo, depending on how the implementing regulations deal with these issues.

We will issue further updates as the detailed rules and policies become available.

Disclaimer: Since the 2020 Job Creation Law was passed by Indonesia’s parliament on 5 October 2020, several versions have circulated online. However, we understand that the final version has yet to be issued. This article was prepared based on the 812-page draft of the 2020 Job Creation Law made available on 12 October 2020. Thus, our views are subject to change depending on the final version, which is awaiting the signature of the President to become law.

1  However, Constitutional Court Decision No. 117/PUU-X/2012 dated 23 April 2013 (Decision 117) created some ambiguity on the applicable termination payments in cases where the employee refuses to be transferred to the new employer or to continue working for the existing employer under the new structure (see Note 2).
2  This also indicates a shift from the Constitutional Court’s interpretation of the applicable termination payments following a corporate restructuring, in Decision 117. In particular, the Court held that where there is a change of ownership which results in a change of control of the employer company, and (a) the employer refuses to continue the employment, then the employee is entitled to Enhanced Severance (see table); or (b) the employee refuses to continue the employment, then the employee is deemed to have resigned and is only entitled to compensation pay (component (c) in the table).

Santi is a founding partner of the firm and advises on foreign investment and corporate affairs.

David is a partner of Herbert Smith Freehills who has been based in Jakarta for 30 years. He advises on M&A, energy, projects, finance and capital market transactions.