The New Investment List contained in Presidential Regulation No. 10 of 2021 regarding Investment Sectors (the New Investment List) contains significant changes to foreign direct investment (FDI) in Indonesia. These changes were foreshadowed by the enactment in November 2020 of Law No. 11 of 2020 regarding Job Creation (the Omnibus Law) and include liberalisation of certain aspects of the healthcare and pharmaceutical sectors.

We present here our observations on the key FDI changes under the New Investment List for businesses operating in Indonesia’s healthcare and pharmaceutical sectors. We have also included a table comparing the foreign ownership rules for these sectors under Presidential Regulation No. 44 of 2016 (the 2016 Negative List) and the New Investment List.

In the healthcare and pharmaceutical sectors, the Omnibus Law has amended the following laws:

Further government regulations are expected to be issued to implement these changes, one of which has already been issued – Government Regulation No. 47 of 2021 on Administration of the Hospitals Sector (the Hospitals GR). We will be publishing a separate bulletin on the Hospitals GR covering the obligations of hospitals and patients, and hospital accreditation procedures, among other things.

Indonesia’s Ministry of Health (MOH) is also likely to issue new regulations to revise the rules for the sectors that are affected. However, it may take some time for practice to develop to clarify how the new regulations and policies will interface with these new FDI rules in practice. It also remains to be seen whether the existing licencing regime will be amended as a result of the changes introduced by the Omnibus Law.

Foreign ownership restriction in the wholesale distribution business, including in the pharmaceutical sector, has been the subject of numerous changes over the last few decades, primarily because protectionist sentiment has generally favoured distribution by local companies.

The New Investment List is silent on the distribution of finished pharmaceutical products. In theory, that should make this line of business open to 100 percent foreign ownership. However, in the past, unwritten policies of the MOH and Indonesia’s Food and Drug Administration (BPOM) have made it difficult for foreign investors to establish foreign-owned distributors of finished pharmaceutical products in Indonesia, even though this business line was not expressly restricted under the 2016 Negative List.

Again, it may take some time to determine how the new regulations and policies of relevant regulators will interface with these new FDI rules. We will continue to monitor developments in this area.

For traditional medicine, the manufacturing of both raw materials and finished products remains closed under the New Investment List. As for the distribution of traditional medicine, while this was not expressly covered by the 2016 Negative List, it was previously a closed sector based on MOH and BPOM unwritten policies. This line of business is also not mentioned in the New Investment List, and we will monitor developments in this area.

Manufacturing and distribution of health equipment

Manufacturing of Classes B, C and D – covering more sophisticated health equipment – remains open to 100 percent foreign ownership. The previous “special licence” from MOH seems to have been removed by the New Investment List.

Distribution of health equipment (all types), previously capped at 49 percent under the 2016 Negative List, is now also open to 100 percent foreign ownership.

Private hospitals (general and specialist hospitals) and main (specialist) clinics (klinik utama in Indonesian) are among the key business sectors to be liberalised, having previously been limited to 67 percent foreign ownership (or 70 percent for ASEAN investors). The New Investment List removes all those foreign ownership and location restrictions (Makassar and Manado were previously excluded locations).

Foreign investors should, however, be mindful of existing sectoral requirements that continue to apply. These include the Hospitals GR, which requires foreign-owned hospitals to be Class A or B hospitals, and MOH Regulation No. 26 of 2018 on Electronically Integrated Licensing Service in Healthcare Sector, as amended by sub-sector regulations on the classification and licencing of hospitals (MOH 26 Reg), which requires foreign-owned main clinics to be established adjacent or near to a Class A or Class B hospital and to integrate their information management systems with the nearby hospital.

Medical laboratory clinics were not expressly covered by the 2016 Negative List, suggesting that they were 100 percent open for foreign investment. However, in practice, unwritten policies of the MOH and BKPM in some circumstances imposed a foreign ownership cap of 67 percent, matching the restrictions for main clinics under the 2016 Negative List.

Under the New Investment List, it appears that medical laboratory clinics remain 100 percent open to foreign investment but now require local partnership with a CMSME. We will continue to monitor developments in this area as well.

The foreign ownership changes introduced by the New Investment List to the healthcare and pharmaceutical sectors are significant and timely.

Consequently, private sector involvement in specific parts of these sectors is being encouraged by the Government, including foreign investment. Covid-19 has further highlighted the challenges faced by Indonesia’s healthcare system and pharmaceutical sector and the importance of “health security” which has become a major Government priority.

Given the range of existing unwritten policies, complex licensing regime and overlapping regulations, the Government’s effort to simplify and liberalise aspects of the healthcare and pharmaceutical sectors through the Omnibus Law and the New Investment List is both welcome and timely.

These changes, which are likely to take some time to implement in practice, should contribute to the long-term development of Indonesia’s healthcare sector. 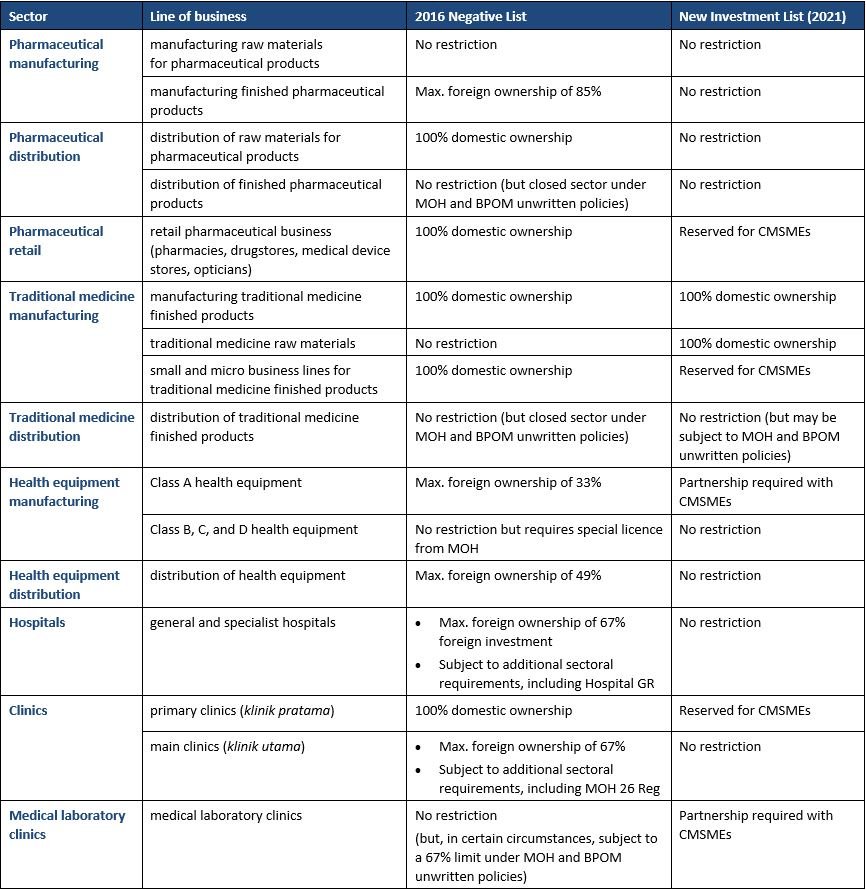 Yuki is a corporate and M&A partner who specialises in competition law and the Technology, Media and Telecommunications (TMT) sector.

Vik is a partner at Herbert Smith Freehills on long-term secondment to the firm. He specialises in cross-border M&A and the financial services, Fintech, real estate and TMT sectors.

Cellia Cotan Cognard is a corporate partner seconded to Herbert Smith Freehills’ associated Indonesian law firm Hiswara Bunjamin & Tandjung. She is ranked as a Rising Star and Next Generation Lawyer for Corporate and M&A in Indonesia (Legal 500 Asia Pacific 2018-2022).